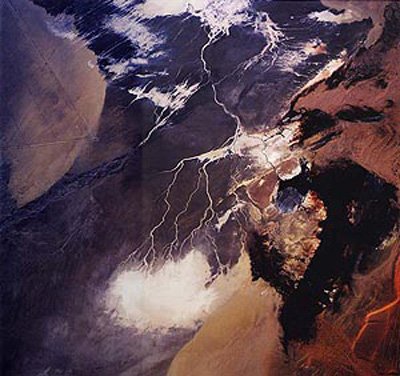 David Maisel: The Lake Project, Limited Edition (with Print)
by Maisel David
Publisher's Description
In 1913, in response to a thirsty and ever-growing Southern Californian megalopolis, the State began syphoning off water in mass quantities from Owens Lake, located on Route 395 between the Sierra Nevadas to the west and Death Valley to the east. By 1926 the lake was all but dead, a vast expanse of exposed deposits of nickel, arsenic, and cadmium. Maisel took to the air over Owens Lake in 2001 and 2002 capturing hallucinatory scenes of color and texture that nearly conceal the fact that they are aerial views. The sheer size of the areas photographed are at direct odds with the microscopic and abstract, two-dimensional space that Maisel creates in these images. In that sense, the work succeeds on several fronts and is well-suited to book form.

This special edition of The Lake Project is limited to 25 copies with an original print, numbered and signed by the artist and presented in a clamshell box.
ISBN: 1590050711
Publisher: Nazraeli Press
Hardcover