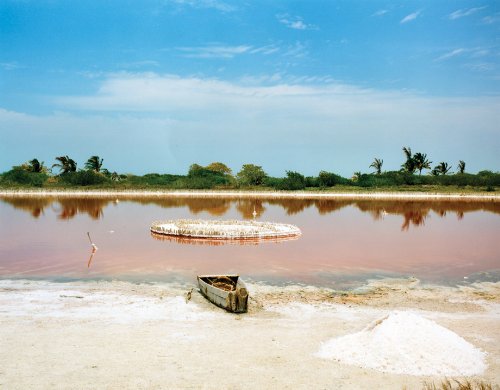 Fried Waters
by Eduardo Del Valle
Publisher's Description
Fried Waters is a photographic poem about time and memory, place and labor, the symbolism of salt and the process by which it snaps from liquid into crystal. — from the Introduction by Mark Haworth-Booth

We are delighted to announce the publication of our third book by the husband and wife team of Eduardo del Valle and Mirta Gómez. This extraordinary volume calls attention to the natural process of converting water to salt at two ancient salt collection sites in Yucatán, Mexico. Fried Waters affirms the artists’ fascination with subjects in a state of flux and offers the viewer a unique and surprising glimpse into the natural phenomenon that is salt. Del Valle and Gómez have received wide critical acclaim for their photographic essay From the Ground Up, which explores the metamorphosis of the vernacular domestic architecture of the Yucatán Peninsula, and which was presented at the MoMA Inaugural Exhibition in New York. Fried Waters is beautifully printed in process color on matt art paper, and casebound in Japanese cloth. Published in an oversized format, this first edition is limited to 1,000 copies, each with an original Type C print mounted on the front cover.

Limited Edition of 25 copies with an original print, numbered and signed by the artist and presented in a clamshell box.

Available in a print run of 25 copies, each with an original print - numbered and signed by the artists - and presented in a clamshell box.
ISBN: 1590050908
Publisher: Nazraeli Press
Hardcover : 96 pages
Language: English