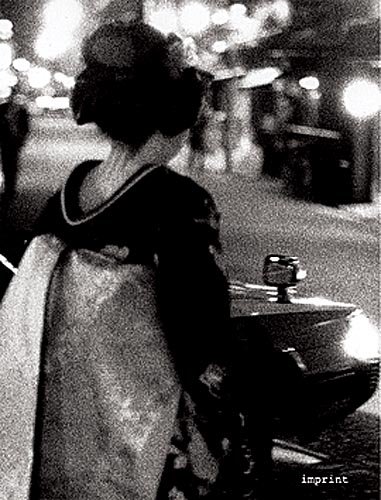 Imprint
by Yuichi Hibi
Publisher's Description
I went back to Japan after seven years of absence, from north to south I traveled the country through the lens: images distorted, images real, only imprints remain today. . . years ago and years ahead perhaps, this Japan travels inside me like a long bamboo path.

Raw talent rarely express itself so forcefully as it does in Yuichi Hibi’s first book of photographs, Imprint. Born in Nagoya in 1964, Hibi has lived in New York since 1988. Trained as an actor and filmmaker, he began making still photographs shortly after his arrival in the United States. He found himself as much at home, and as much a stranger, in his new surroundings as he had in his old. Imprint opens with a facsimile of a handwritten note dated 1988, written to a friend in Japan, which serves as an introduction to the pictures that follow. The plate section itself is divided into two sections – one of New York and one of Japan – and the viewer follows Hibi through the nights and loneliness of both. Imprint is limited to 1,000 casebound copies.
ISBN: 1590051246
Publisher: Nazraeli Pr
Hardcover : 192 pages
Language: English