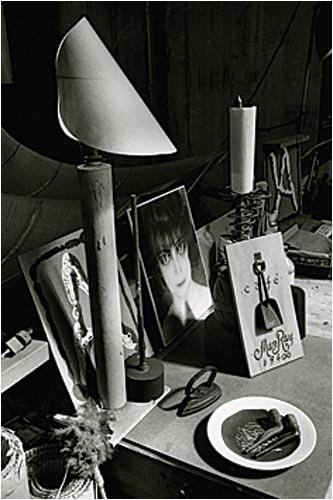 The Studio of Man Ray
by Ira Nowinski
Publisher's Description
This small volume represents the somewhat larger volume of Man Ray’s Paris studio. Inside, we shall see some of the images which inhabited the space where so many other images were made. Here, unassuming objects once stood on tables to be rayographed – dissolved into their masks. A leftover head still rests on a shadow, its portrait taken . . . taken . . . not as something taken away by a burglar in a bag, but as something taken into consideration. — from the Introduction by William H. Gass

Man Ray’s widow Juliette died in 1991, and her brothers formed a trust to foster worldwide recognition of this important artist. Following a disastrous flood in the studio in 1992, the art works and many of the personal effects that it had contained were put in storage, eventually to be sold off to pay taxes. Before any of these events took place, however, Ira Nowinksi photographed the studio inside and out, preserving the Paris studio on film exactly as it had been during Man Ray’s final days. The beautifully composed, richly printed black-and-white photographs allow, in Gass’s words, “memories to regain their rights. Layer after layer, print upon print, level above level, art echoing art: I think Man Ray would have loved the idea.”
ISBN: 1590051378
Publisher: Nazraeli Pr
Hardcover : 72 pages
Language: English