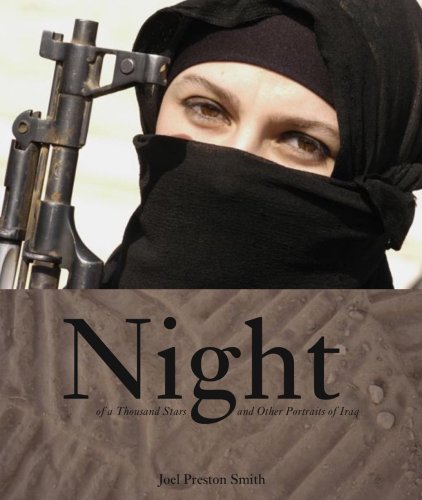 Night of a Thousand Stars & Other Portraits Of Iraq
by Joel Preston Smith
Publisher's Description
. . . Later still, when the images resolved to such a point of clarity that Plato’s perfect, eternal forms were now clearly visible as rubble – from which the imperfect, mortal bodies of Iraqis were exhumed daily – we found it “sad.” None of us had seen Iraq from the vantage point of a glass eye suspended in a dark and astral orbit, naming as violent geometries what we below knew to be people. Such a vantage point seemed like blindness itself, viewed from a great distance. We were its spectators.

Night of a Thousand Stars documents – in text and photographs – life in Iraq before and after the U.S. invasion in 2003. Joel Preston Smith traveled in central and northern Iraq as an independent journalist, living with Iraqis and Kurds, and patrolling with U.S. soldiers. His book is the first comprehensive portrait of Iraqi society in a time of war, as seen from the perspective of both Iraqis and U.S. soldiers. But this is not a book of military and political analysis; Night of a Thousand Stars is a humanistic portrait, focusing heavily on Iraqi home, work and social life during the occupation.
ISBN: 1590051521
Publisher: Nazraeli Pr
Hardcover : 125 pages
Language: English