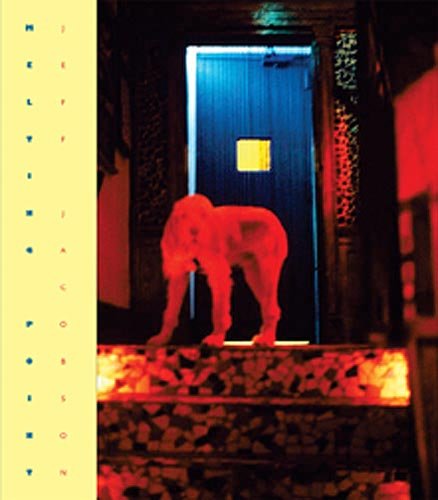 Melting Point
by Jeff Jacobson
Publisher's Description
“At the height of the Cold War in 1950s Iowa, we did duck and cover air raid drills in school. Crouching under my desk with my hands folded over my head, I remember wondering that if the atomic bomb could melt my flesh right off my bones, how was this battered wooden desk supposed to protect me. Something was seriously awry. Fifty years later I stood on the Jersey shore of the Hudson and saw the World Trade Center disintegrate. I live in a meltdown period, when old norms of politics, religion and even photography are changing. Melting is a transformation, one form dissolves, another emerges.”

Jeff Jacobson began photographing while working as a civil rights lawyer in the 1970s, taking pictures of southern jails and the rural south. He joined Magnum in 1978, eventually leaving to help form Archive Pictures in 1981. He published his first book, My Fellow Americans, to wide critical acclaim in 1990. Melting Point is a dreamlike journey through the photographer’s own past, masterfully interwoven with recent world events and glimpses of the future. Edited by Joan Liftin and Sylvia Plachy, this beautifully produced monograph is an important addition to the literature available on one of America’s most independent and thought-provoking photographers.
ISBN: 1590051564
Publisher: Nazraeli Pr
Hardcover : 104 pages
Language: English