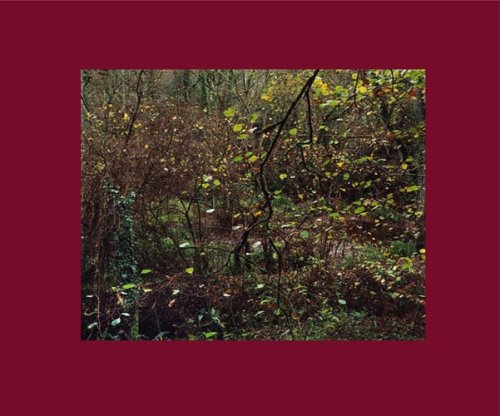 The Painter's Pool
by Jem Southam
Publisher's Description
Stoke Woods, in the south west of England, are truly ancient woodland, with records showing them gifted by King Athelston to the Church in Exeter in 953 AD. For painter Mike Garton, these woods – a mixture of oak, beech, ash, wild cherry, sycamore and the more recently introduced larch and Douglas fir – were both his studio and his obsession. Every day for over two decades he would go and capture on canvas what he saw amongst the woodland canopy, leaving his works-in-progress rolled up in hidden dens. He constructed a pool where a tree had fallen across a stream, and secretly tended it for many years. Jem Southam happened upon both painter and pool, and began to take pictures of the latter. The early photographs show signs of Garton's presence – an easel, poles of wood, bits of string – but as illness prevented him from working, these disappeared into their surroundings. The Painter's Pool is a touching story beautifully and discreetly revealed through the lens of one of Britain's most outstanding photographers. Jem Southam's work has been widely exhibited both in Europe and the United States, and is represented in many major collections such as the Victoria & Albert Museum and the British Council.
ISBN: 1590051734
Publisher: Nazraeli Pr
Hardcover : 36 pages
Language: English