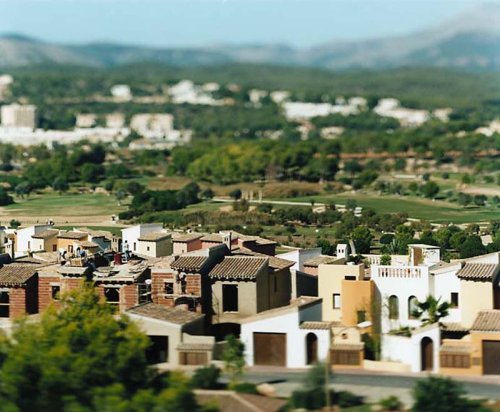 Mallorca: Island in Progress
by Marc Rader
Publisher's Description
With his striking new book Mallorca: Island in Progress, German photographer Marc Räder has landed on a Spanish island known primarily as a Mediterranean holiday hot spot. Over the course of four years, he watched the drastic changes of landscape and architecture, and the annual flow of some ten million tourists over the island. Like an archaeologist, he digs with his camera through the different decades of a paradise being changed by the parameters of global capitalism. Räder’s “docu-fiction” style turns the ordinary landscape into pictures which resemble fantastic architectural models, putting into question the veracity of his medium. The island of Mallorca has become a laboratory of tourism, a temporary paradise: a European melting pot which struggles from overusage, environmental destruction, and growing demands of established and recently-arrived inhabitants. Marc Räder’s work has been widely exhibited in the United States, Europe and Asia, and is included in the permanent collection of the Museum of Modern Art, New York.
ISBN: 1590051815
Publisher: Nazraeli Press
Hardcover : 77 pages
Language: English