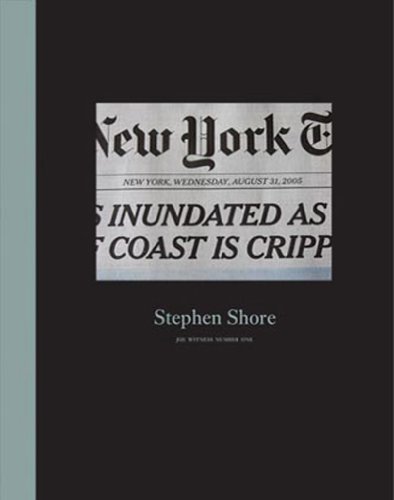 Witness Number One
by Stephen Shore
Publisher's Description
Magazines and books are generally edited and designed by unseen hands, hands that are often limited by the ideas and agendas of the publisher. What if, we thought, an artist was not only the primary focus of each issue in this biannual series, but as “guest editor” was also responsible for the design of its cover and much of its contents as well? Stephen Shore is currently creating a series of small, limited edition books which will serve as “visual time capsules.” As Shore himself is exploring the basic ideas of what a book is, he was the ideal choice for Witness Number One. The title for the series is borrowed: Daido Moriyama and Michael Kenna gave a joint presentation in Tokyo earlier this year on their mutual passion for, and work made on, Japan’s northernmost island, Hokkaido. During the presentation, Moriyama described himself as a “witness” rather than a participant in the events that he captures on film. The idea of being a witness – of transcending the importance of Self and instead focusing on what one sees in one’s surroundings – has deep roots. Daido Moriyama will be the subject and guest editor of Witness Number Two. Witness is published by Joy of Giving Something, Inc, and distributed internationally by Nazraeli Press.
ISBN: 1590051882
Publisher: Nazraeli Pr
Hardcover : 77 pages
Language: English