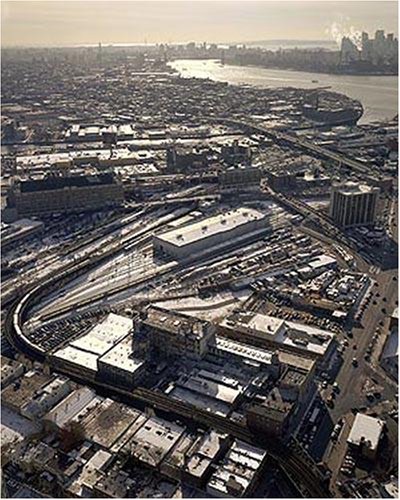 Habitat 7
by Jeff Liao
Publisher's Description
One of the main arteries between Queens and Manhattan is the IRT '7' subway and rail line. Jeff Liao lives along this route, and takes the train every day. Over the course of many journeys, he has developed a connection with his fellow passengers, many of them fellow immigrants who, he believes, share his dream of a better life in America. Liao walked the length of the line and selected locations where there was evidence of the '7', even if there was no train in sight. These photographs show wide sweeps of the neighborhood with such an amazing depth and perspective that it is a surprise to learn that he does not use a panoramic camera. Instead, he makes several 8 x 10 negatives of the same scene and combines them digitally, taking up to 60 hours to complete one composition. His technique is as breathtaking as the pictures he produces, and is described in greater detail in the essays by Anne Wilkes Tucker and Tom Finkelpearl. Jeff Liao was born in Taiwan and moved in New York in 1999. Habitat 7 is Liao's first monograph. It is limited to 500 numbered and signed copies. A special edition, with an original print, will be made available in Autumn.

Signed copy of the book with a signed original 12 x 24 inch print, 5 images available, 10 of each