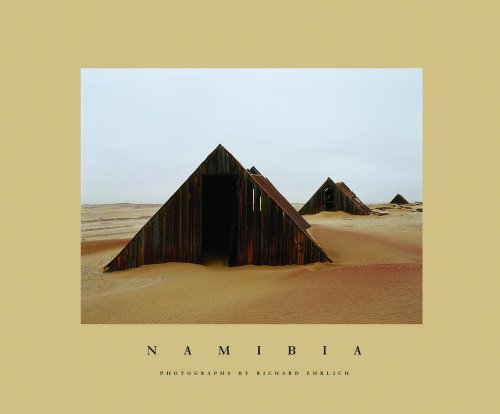 Namibia
by Richard Ehrlich
Publisher's Description
Namibia, on the south-west coast of Africa, is sandwiched between two vast deserts - to the east is the Kalahari and to the west, the Namib, which runs along the entire coastline of this large and sparsely populated country. It is a land of amazing primary sources of diamonds. Much of Namibia is desert, and the sand dunes, shaped by the winds, are colored by the prevailing light. It is a photographer's dream of a place, so much so that it is hard to imagine a series of Namibian pictures that are as arrestingly fresh - and frankly interesting - as these by Richard Ehrlich. A renowned surgeon, he has taken many photoraphs in his working life, as a way of keeping records during surgery. The melding of his clinical precision with his artistic sensibiities has produced an incredible body of work. Concentrating mostly on an abandoned diamond mine, and the deserted mining village that housed its workers, Ehrlich - who obtained special permission to enter the area - has captured not only the breathtaking landscape but also the insides of homes occupied now only by piles of drifting sand. The colors, the shapes, the patterns, and the small signs of former inhabitants are meticulously and beautifully recorded in this gorgeous new book.
ISBN: 1590052196
Publisher: Nazraeli Press
Hardcover : 56 pages
Language: English