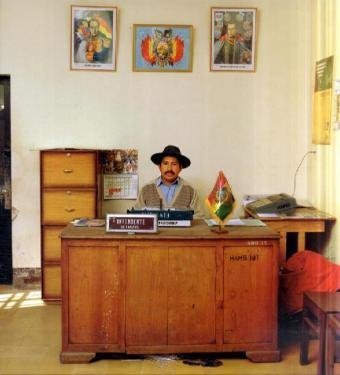 Bureaucratics
by Jan Banning
Publisher's Description
The third title in our popular “Parr/Nazraeli Series of Ten” is Jan Bannings Bureaucratics. This book offers a comparative study of the culture and symbols of state civil administrations – the institutions through which citizens are generally confronted with the state. Eight countries, based on political, cultural and historical considerations, are represented here: Bolivia, China, France, India, Liberia, Russia, Yemen, and the United States. The subjects in the photographs are all civil servants holding executive power. The vast majority are appointed (not elected), in different services and at different levels: from fiscal authorities to police, from governors to local clerks. Each subject is posed behind his or her desk, within their bureaux: the rooms from which they exercise their (substantial or very limited) power. Jan Banning (born in Almelo, the Netherlands in 1954) is an historian and photographer, specializing in documentary photography. The author of several book, his work has been widely exhibited throughout Europe and the United States.