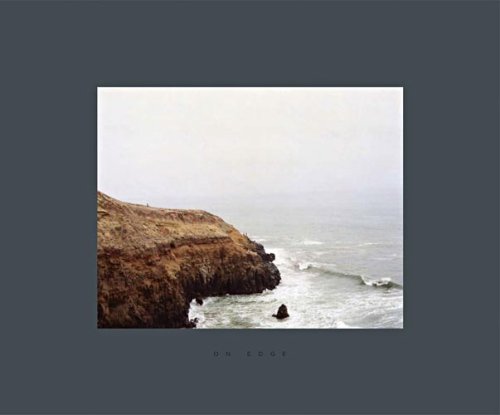 On Edge
by Karin Apollonia Mueller
Publisher's Description
On Edge is Karin Apollonia Müller’s second monograph, and the first to be published by Nazraeli Press. While Angels in Fall (2001) dealt with the disconnect between human beings and their environment, On Edge shows the earth “crumbling away”, and our futile efforts to control or hide the subtle invasion of nature into cultivated spaces. Working in color with a muted palette and low contrast, Müller creates powerful images which evoke a sense of displacement in keeping with artist’s “visitor status” as a foreigner in Los Angeles. Born in Heidelberg in 1963, Müller grew up as the daughter of a sea captain. She studied photography and film at the University of Essen before moving to the western United States in 1995. Karin Apollonia Müller’s work has been widely exhibited in the United States and Europe, and is included in such collections as The Museum of Modern Art, New York; the Whitney Museum, New York; and the San Francisco Museum of Modern Art. On Edge is beautifully printed on matt art paper, bound in cloth wrapped in transluscent paper. This first printing is limited to 500 copies.

About the Limited Edition
This special edition of On Edge, packaged with an original print in a clamshell box, is limited to 25 copies.
ISBN: 1590052390
Publisher: Nazraeli Press
Hardcover : 48 pages
Language: English