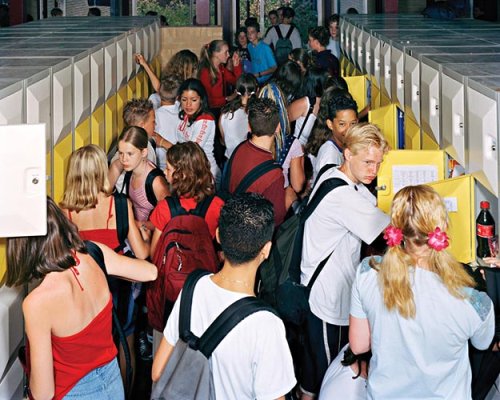 School
by Raimond Wouda
Publisher's Description
“Within contemporary photographic practice there is much work being done with the 5/4 camera. The resulting large and beautiful prints can be both seductive and highly detailed. It is also possible to see many brilliant explorations of institutions or particular places usually done with a medium or small format camera. I cannot think of any other project where you get both of these ideas running together so seamlessly. This is part of Wouda’s great achievement in these pictures.” — from the Introduction by Martin Parr

The fourth title in our “Parr/Nazraeli Edition of Ten” (titles 1 through 3 shown left), Raimond Wouda’s School shows groups of pupils at numerous secondary schools in the Netherlands. Rather than depicting classrooms, Wouda chose to photograph the places where students relax between classes, placing his large-format camera high on a ladder and triggering the shutter from the ground via remote control to capture specific moments. According to Wouda, the current debates about substance and behaviour in secondary schools have gone unnoticed by the students themselves, for whom school is a relatively safe place in which to meet and interact with their friends, and to discover their own identity.
ISBN: 1590052412
Publisher: Nazraeli Press
Hardcover : 60 pages
Language: English