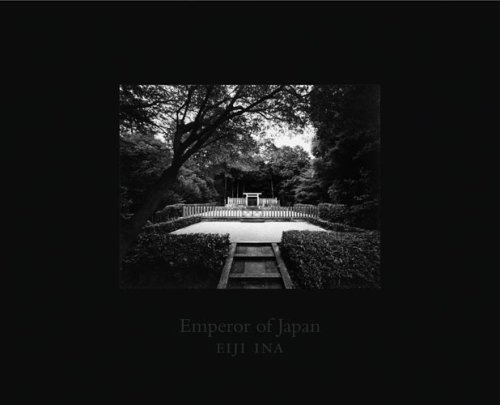 Emperor of Japan
by Eiji Ina
Publisher's Description
To us Japanese, issues concerning “the emperor” are not solely matters of politics and history, but are also deeply, if subtly, connected to our everyday lives and spirit . . . How many people have gone to Hachioji, just outside of Tokyo, to visit the Musashino Imperial Mausoleum where the Showa Emperor is buried? How many people know what kind of scene has been created there? I too, of course, watched the broadcast of the imperial funeral, but I have never actually been to the mausoleum. — from the Introduction by Ryuichi Kaneko

In Emperor of Japan, Eiji Ina presents photographs of the misasagi, or burial mounds, of all 124 Japanese emperors since the Kofun period, reaching back some 1,600 years. The scenes that Ina has captured – not of the tombs themselves, but rather the places for worshipping at the tombs, and the surrounding gardens and landscapes – were created by the emperor system, with its claim of an unbroken line of sovereigns, that served as the foundation of the modern nation state of Japan. Our second monograph on the work of Eiji Ina, Emperor of Japan is printed in an oversized format on matt art paper, bound in Japanese cloth and limited to 1,000 casebound copies.
ISBN: 1590052455
Publisher: Nazraeli Press
Hardcover : 132 pages
Language: English