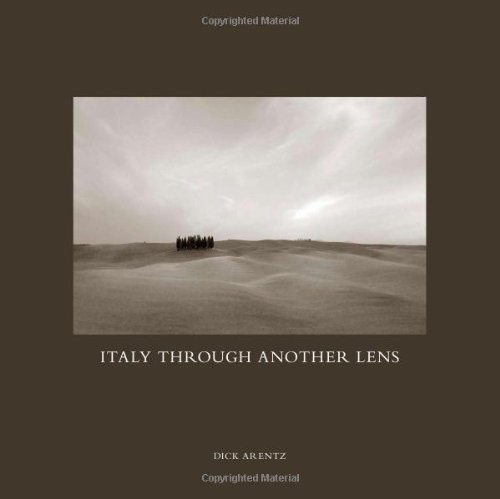 Italy Through Another Lens/ Italia Una Visione Diversa
by Dick Arentz
Publisher's Description
Dick Arentz spent 35 years exposing film through the bellows of large-format view cameras. He printed his images using the 19th century process of platinum and palladium printing, for which he is the recognized master. His books include Platinum & Palladium Printing, as well as Nazraeli publications The Grand Tour and British Isles. Now with Italy Through Another Lens, Arentz has moved to the 21st century, using the latest technology. His impressions of Italy are indeed “Italy Through Another Lens.” Arentz presents a series of landscapes not generally seen by Italians or visitors, and which, framed by his unerring eye, radiate with the rich, haunting beauty of Italy – from the Italo-Albanese hill towns in Sicily and Calabria to the little-known canals of Milano. The work of Dick Arentz has been widely exhibited internationally, and is included in such important museum collections as the Museum of Modern Art, New York; San Francisco Museum of Modern Art; Corcoran Gallery, Washington, D.C.; and Canadian Centre for Architecture, Montreal. Italy Through Another Lens is limited to 1,000 casebound copies, and opens with an introduction by Lucia Gillard.
ISBN: 1590052714
Publisher: Nazraeli Press
Hardcover : 64 pages
Language: English
Dimensions: 12 x 0.5 x 12 inches