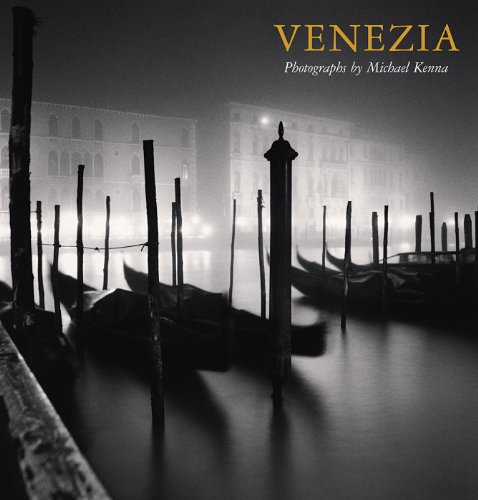 Venezia (Italian Edition)
by Michael Kenna
Publisher's Description
This crumbling jewel of Northern Italy, built completely on marshland, is steeped in history and irresistibly imbued with romance. Known as “The City of Light” and “Queen of the Adriatic,” Venezia is indelibly tinged with dark intrigue, decadence and decay. Comprising 118 small islands along the Adriatic Sea, Venezia was a maritime power during the Middle Ages and Renaissance, and a staging area for the Crusades. The city’s long decline began some 500 years ago; but its survival of two episodes of the Black Death, and the loss of its thousand years of independence to Napoleon Bonaparte in 1797 – as well as the fact that it appears to be sinking slowly into the waters on which it is built – has only added to its mystique. This beautifully produced book brings together a collection of haunting images quietly made by Michael Kenna over the last 30 years, many of which are published here for the first time. Arguably the most influential photographer of his generation, Michael Kenna is the subject of over 35 monographs. The images in Venezia are part of a large retrospective exhibition of Kenna’s work at Palazzo Magnani Museum, Reggio Emilia, Italy in Spring, 2010. This first printing of Venezia is limited to 2,000 hand-numbered, slipcased copies.