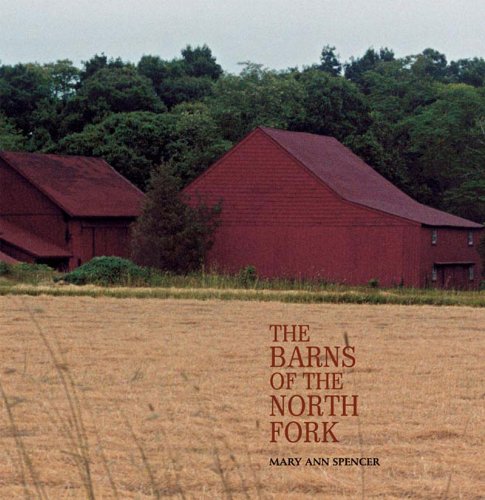 Barns of the North Fork
by Mary Ann Spencer
Publisher's Description
The North Fork is the roughly sixty-mile-long spit of New York’s Long Island that runs from Riverhead to Orient Point. With the fairly well protected Long Island Sound on the North and Peconic Bay on the South, it was a logical place for some of the earliest English immigrants to settle and build barns. It is still home to more working farms than any other part of the island. And from the timber-frame barns of the British farmers of the seventeenth century to the pole barns of the twentieth, the variety is stunning.

In a survey sponsored by the Old House Society in Cutchogue, Mary Ann Spencer spent the last few years making a comprehensive inventory and photographing more than six hundred barns on the North Fork. Two hundred of them are still in use, although their fate is by no means certain. Here in their glory (and sometimes less than that) are the most interesting barns,which reveal, among other things, their functional development, their often haphazard fenestration, their soft patina of age, and their fit in the landscape. Spencer’s complete survey forms a second part of this book, which provokes feelings of nostalgia and raises our fears for the future of these wonderful structures.

MARY ANN SPENCER has long been involved in historic preservation. A former board member of the Society for the Preservation of Long Island Antiquities (SPLIA), she is a photographer living in East Setauket, New York.

ROBERT MACKAY is President of the Society for Preservation of Long Island Antiquities. An exhibition of the barn photographs begins at SPLIA in Cold Spring Harbor and will travel to other Long Island locations over the next few years.
ISBN: 1593720149
Publisher: Quantuck Lane
Hardcover : 176 pages
Language: English
Dimensions: 10 x 9.9 x 0.8 inches