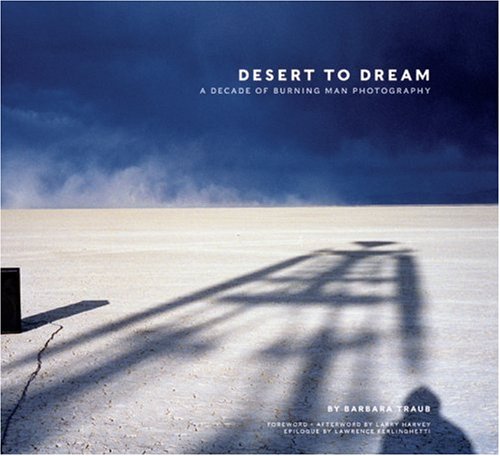 Desert to Dream: A Decade of Burning Man Photography
by Les Blank
Publisher's Description
“Barbara Traub captures an expansive desert of everything but normality where monstrous beings of all shapes, colors and sizes congregate each year with contraptions that challenge everyday familiarity.”—Sidelines Online

Attended by 20 people on a San Francisco beach in 1986, the “Burning Man” festival has mushroomed into a desert pilgrimage for 40,000 people annually. For one week, Burning Man qualifies as Nevada's fifth-largest city, and climaxes on Labor Day weekend with the burning of four-story tall wooden “man.”

This is an unprecedented photographic record of an evolving decade of Burning Man, from its infancy as a performance art exhibit to its explosion as a pop culture destination. Photographer Barbara Traub captures the sacred and profane, from inspired costumes to otherworldly artifacts that defy convention.