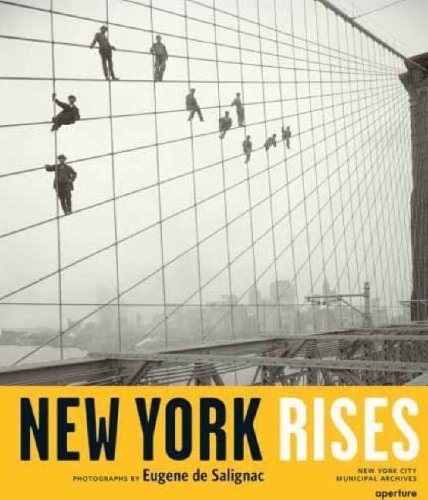 New York Rises: Photographs by Eugene de Salignac
by Eugene De Salignac
Publisher's Description
From 1906 to 1934, Eugene de Salignac shot over 20,000 stunning 8x10-inch glass-plate negatives of New York City. As sole photographer at the Department of Bridges/Plant and Structures during that period of dizzying growth, he documented the creation of the city's modern infrastructure-including bridges, major municipal buildings, roads and subways. For years, de Salignac's remarkably lyrical photographs have been featured in books and films, but never credited to their author. New York Rises, which will accompany a traveling exhibition, is the first monograph to present this unprecedented work as an aesthetically coherent oeuvre by a photographer with a unique vision. As meticulous in his record keeping as he was creative in his photography, de Salignac left five handwritten logs that identify each negative by place and exact date. This information is complemented throughout the book by narrative captions expanding on themes such as accidents, bridges, workers and the Depression. Essayist Michael Lorenzini unearths primary sources to reconstruct de Salignac's biography and Kevin Moore explores the photographer's work in the context of other masters of the period, including Eugene Atget and Berenice Abbott.
ISBN: 1597110132
Publisher: Aperture
Hardcover : 144 pages
Language: English
Dimensions: 9.7 x 11.1 x 0.7 inches