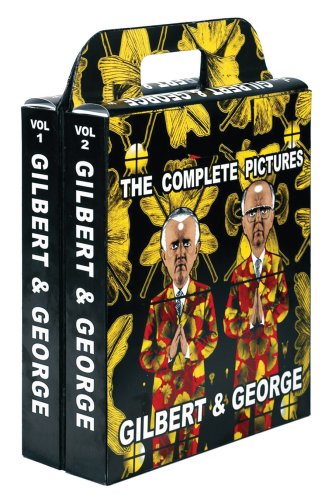 Gilbert & George: The Complete Pictures, 1971--2005
by Rudi Fuchs
Publisher's Description
Gilbert & George are among the foremost artists of their generation. A collaborative team, they were early to explore performance as an art form, and early to explore the idea that every aspect of daily life could be classed as such. They were early to mingle photography and graphics in a style reminiscent of advertising, and early to address sexual identity in that work. In fact, they were early to do much that viewers now take for granted. Their work has been exhibited worldwide since the beginning of the 1970s, and is either unusually accessible or completely unpalatable, depending on the viewer's mindset. It has attracted both fierce controversy and enormous acclaim, including the 1986 Turner Prize and the U.K.'s slot at the 2005 Venice Biennale. At last, on the fortieth anniversary of their meeting (September 25, 1967, Saint Martin's, London) and on the eve of a major retrospective that will tour six venues around the world-including the Brooklyn Museum, the Milwaukee Art Museum and the de Young Museum in San Francisco-here is a book that does justice to the scale, depth and ambition of their artistic achievement. Or rather, here are two books: designed and produced by the artists, this luxurious two-volume hardback set, which comes in a customized carrying case with handles, documents every picture the pair has created over the course of their 35-year career. With details and installation views of many significant pieces, it includes 1500 color illustrations. The Complete Pictures will be the most thorough and extensive publication on the artists' work ever assembled.
ISBN: 159711037X
Publisher: Aperture
Hardcover : 1200 pages
Language: English
Dimensions: 11.1 x 13 x 4.9 inches