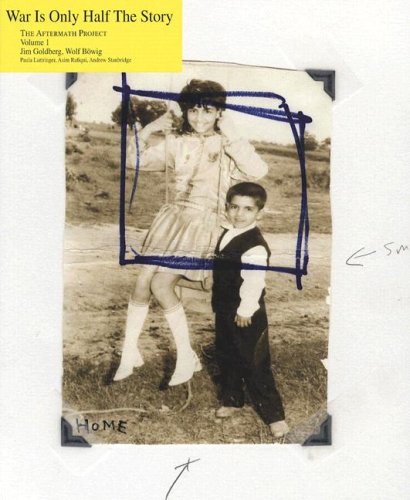 War is only half the story. (The Aftermath Project, Vol. 1)
by Jim Goldberg
Publisher's Description
Founded by photographer and writer Sara Terry, the nonprofit Aftermath Project documents the long-term repercussions of conflict that are so often neglected by the popular media. Terry, whose work has been widely exhibited at such venues as the United Nations and the Museum of Photography in Antwerp, initiated this project after her extensive documentary work on postwar Bosnia. Through grant competitions and partnerships with other institutions, Aftermath disseminates reportage on post-conflict rehabilitation and attempts to create new avenues for peace. War Is Only Half the Story presents the winners of the Aftermath Project’s first annual grant competition: Jim Goldberg, whose project The New Europeans records the struggles of asylum seekers and immigrants; Wolf Böwig, whose The Forgotten Island: Narratives of War in Sierra Leone (second place) is recounted through the eyes of the sole survivor of an attack on Bonthe Island; and runners-up Andrew Stanbridge, Asim Rafiqui and Paula Luttringer.
ISBN: 1597110426
Publisher: Aperture
Paperback : 128 pages
Language: English