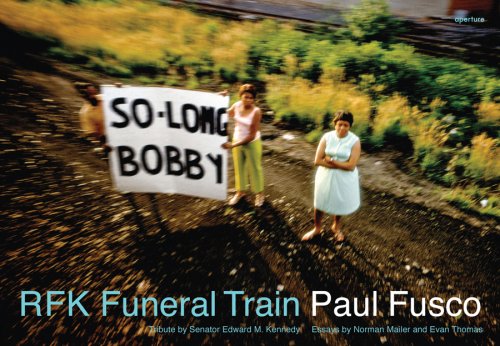 On June 5, 1968, while campaigning for the Democratic presidential nomination, New York Senator Robert F. Kennedy was assassinated at the Ambassador Hotel in Los Angeles. His death, which occurred only two months after the assassination of Dr. Martin Luther King, Jr., came as a terrible shock to an already-grieving nation. Three days later, a funeral train carried his coffin from New York to its final resting place in Arlington Cemetery. Hundreds of thousands of people stood in the searing heat as the train traveled slowly en route to Washington, D.C. Paul Fusco, then a staff photographer for Look magazine, accompanied the train on its journey. The images he made convey the respect the American people—both rich and poor, black and white—held for RFK, a man who had come to symbolize social justice. As Fusco writes,“when Bobby rose to try to reestablish a government of hope, the hearts of Americans quickened and excitement flared. Then tragedy struck again. The blow was monumental.”Two previous versions of RFK Funeral Train—a 1999 limited-edition and a 2000 edition (now out-of-print)—have been heralded as contemporary classics. This newly expanded volume—released to commemorate the fortieth anniversary of Kennedy’s death—offers 30 never-before-published images, alongside a memoir of Kennedy by Norman Mailer and a retelling of the assassination by Newsweek editor and RFK biographer Evan Thomas.
ISBN: 1597110647
Publisher: Aperture
Hardcover : 180 pages
Language: English