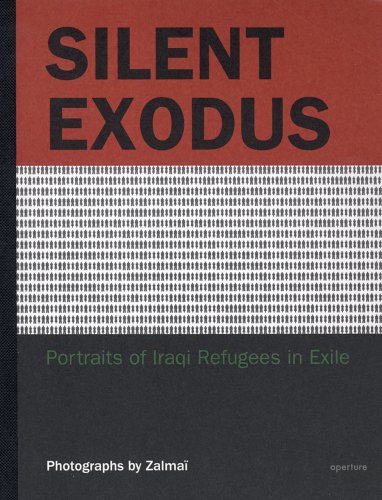 Silent Exodus: Portraits of Iraqi Refugees in Exile
by Zalmai
Publisher's Description
In early 2008, the United Nations High Commissioner for Refugees reported that an estimated 4.4 million Iraqis had been displaced from their homes as a result of the war. While nearly half were uprooted internally, the remaining citizens escaped to neighboring countries. The New York Times called the escalating crisis “the largest exodus since the mass migrations associated with the creation of the state of Israel in 1948.” Today, the situation of most refugees remains dire; months and years into forced flight, many are running out of money, food, and the good will of their hosts.

In Silent Exodus, Zalmaï chronicles the plight of Iraqi refugees in Syria, Jordan, and Lebanon. Over the course of several trips made in 2007 with the support of Human Rights Watch, Zalmaï interviewed refugee families, collected their individual stories, and photographed them in their homes, where many remain in uncertainty. Although frequently harassed by neighbors, they are still afraid to return home, given the instability and violence that lingers in Iraq. Rarely told and under-reported, this is a compelling story, which deserves a wider audience.
ISBN: 1597110779
Publisher: Aperture/UNHCR
Paperback : 96 pages
Language: English
Dimensions: 6.2 x 7.8 x 0.4 inches