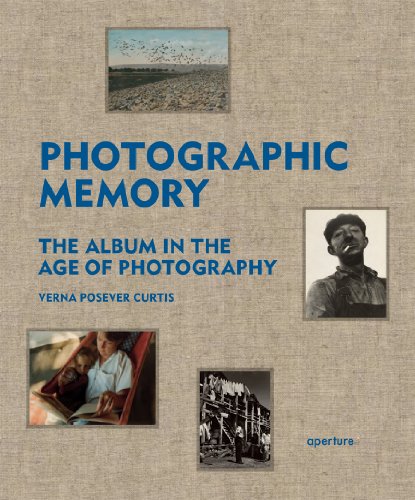 Photographic Memory: The Album in the Age of Photography
by Verna Posever Curtis
Publisher's Description
As photography became an increasingly accessible medium in the twentieth century, the popularity of the photographic album exploded, yielding a wonderful range of objects made for varying purposes—to memorialize, document (officially or unofficially), promote, or educate and sometimes simply to channel creative energy. Photographic Memory: The Album in the Age of Photography traces the rise of the album from the turn of last century to the present day, showcasing some of the most important examples in the history of the medium, as collected by the Library of Congress. The book includes albums by acclaimed photographers and filmmakers, among them Walker Evans, Danny Lyon, Holland Day, Jim Goldberg, Dorothea Lange, Duane Michals, Leni Riefenstahl and W. Eugene Smith, as well as lesser-known but equally significant albums. Each album is beautifully reproduced over numerous spreads with an accompanying detailed explanatory text. An insightful history of the album format, as well as an informative essay about caring for and restoring albums are included. At a time when the physical collection of photographs is becoming increasingly immaterial through the ascent of digital publishing, and at a time in which radical shifts have occurred in the status of handmade artists’ objects, Photographic Memory is a comprehensive illustrated history of a form of presentation that became something of an art in itself.