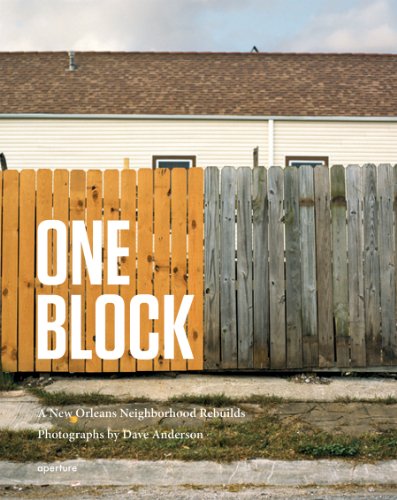 Dave Anderson: One Block
by Dave Anderson
Publisher's Description
American photographer Dave Anderson’s One Block follows the reconstruction of a single New Orleans block in the wake of Hurricane Katrina, delivering a powerful portrait of the storm’s ongoing physical and psychological impact on the city and its residents. Using portraiture, still lifes and abstract images, Anderson documents the evolution of both the street and its houses as residents literally rebuild their lives, exploring the very nature of community while testing its resilience. Anderson’s compassionate treatment of the neighborhood’s straitened financial circumstances and its courageous reconstruction has drawn comparisons to coverage of the Great Depression by Dorothea Lange,Walker Evans and other Farm Security Administrationfunded photographers. Seventy years later, between the devastation left by Katrina and the current housing crisis, the stability and permanence of the American home are once again in jeopardy, lending Anderson’s record a heightened, timely pertinence. One Block is an extension of Anderson’s optimistic belief that the good within each of us is what unites us, as well as his hope that this commonality will afford us the grace to both endure and emerge from our current turmoil.