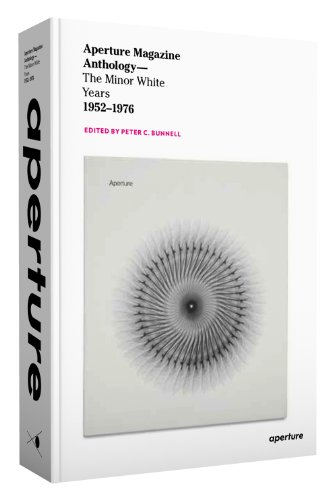 Aperture Magazine Anthology: The Minor White Years, 1952-1976
by Peter Bunnell
Publisher's Description
Published on the occasion of its sixtieth anniversary, this is the first ever anthology of Aperture magazine. This long-awaited overview provides a selection of the best critical writing from the first 25 years of the magazine—the period spanning the tenure of cofounder and editor minor White. Aperture was established in 1952 by a group of photographers, including Ansel Adams, Dorothea Lange, Barbara Morgan and historian-curators Beaumont and Nancy Newell. their intention was to provide a forum “in which photographers can talk straight to each other, discuss the problems that face photography as profession an art, share their experiences, comment on what goes on, descry the new potentials.” With its far-ranging interests in diverse photographic styles, myriad themes and subjects (including a strong streak of spirituality in diverse forms) and an adventurous commitment to a broad international range, Aperture has had a profound impact on the course of fine-art photography. The texts and visuals in this anthology were selected by peter C. Bunnell, White’s protege and an early member of the Aperture staff, who went on to become a major force in photography as an influential writer, curator and professor. Several articles are reproduced in facsimile, and the publication is enlivened throughout by other features, including a portfolio of exceptional covers, as well as a selection of the colophons (short statements or quotes) that appeared at the front of each magazine.
ISBN: 1597111961
Publisher: Aperture
Hardcover : 455 pages
Language: English
Dimensions: 6.9 x 9.6 x 2 inches