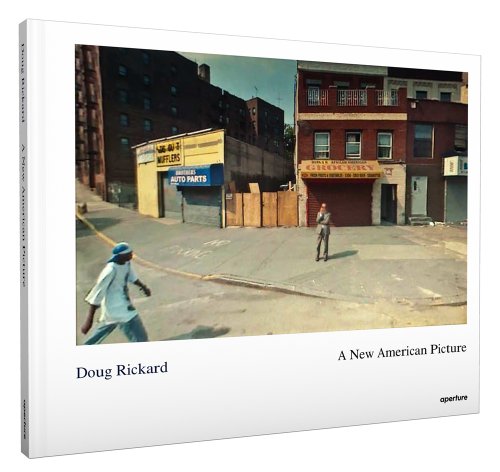 Doug Rickard: A New American Picture
by Erin O'Toole
Publisher's Description
Doug Rickard's A New American Picture offers a startling and fresh perspective on American street photography. While at first glance the work looks reassuringly familiar and well within the traditional bounds of the genre, Rickard's methodology is anything but conventional. All of the images are appropriated from Google Street View; over a period of two years, Rickard took advantage of the technology platform's comprehensive image archive to virtually drive the unseen and overlooked roads of America--bleak places that are forgotten, economically devastated and abandoned. With an informed and careful eye, Rickard finds and decodes these previously photographed scenes of urban and rural decay. He rephotographs the machine-made images as they appear on his computer screen, framing and freeing them from their technological origins. As Geoff Dyer has commented on the work, "It was William Eggleston who coined the phrase 'photographing democratically,' but Rickard has used Google's indiscriminate omniscience to radically extend this enterprise--technologically, politically and aesthetically." A limited-edition monograph of A New American Picture was published by White Press/Schaden in 2010; upon publication, it was named a best book of that year by Photo-Eye magazine, and quickly went out of print. This edition brings Rickard's provocative series, including more than 30 new images, to a wider audience.
Doug Rickard (born 1968) studied American history and sociology at University of California, San Diego. He is the founder of American Suburb X (www.americansuburbx.com) and These Americans (www.theseamericans.com), aggregating websites for essays on contemporary photography and historical photographic archives. A New American Picture was included in the annual New Photography exhibition at The Museum of Modern Art, New York, in 2011.
ISBN: 1597112194
Publisher: Aperture
Hardcover : 144 pages
Language: English
Dimensions: 10 x 12.6 x 0.8 inches