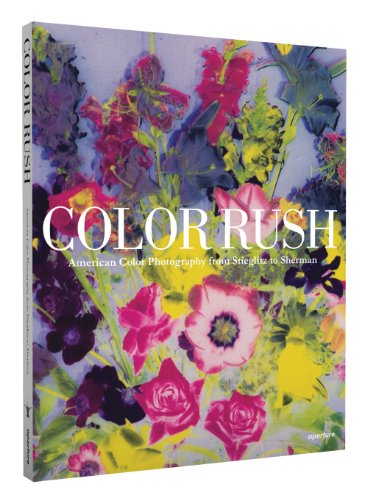 Color Rush: American Color Photography from Stieglitz to Sherman
by Lisa Hostetler
Publisher's Description
Today color photography is so ubiquitous that it’s hard to believe there was a time when this was not the case. Color Rush explores the developments that led us to this point, looking at the way color photographs circulated and appeared at the time of their making. From magazine pages to gallery walls, from advertisements to photo- journalism, Color Rush charts the history of color photography in the United States from the moment it became available as a mass medium to the moment when it no longer seemed an unusual choice for artists. The book begins with the 1907 unveiling of autochrome, the first commercially available color process, and continues up through the 1981 landmark survey show and book, The New Color Photography, which hailed the widespread acceptance of color photography in contemporary art. In the intervening years, color photography captured the popular imagination through its visibility in magazines like Life and Vogue, as well as through its accessibility in the marketplace thanks to companies like Kodak. Often in photo histories, color is presented as having arrived fully formed in the 1970s; this book reveals a deeper story and uncovers connections in both artistic and commercial practices. A comprehensive chronology and examples of significant moments and movements mark the increasing visibility of color photography. Color Rush brings together photographers and artists such as Ansel Adams, Harry Callahan, William Christenberry, William Eggleston, Walker Evans, Nan Goldin, Saul Leiter, Helen Levitt, Philip-Lorca diCorcia, La´szlo´ Moholy-Nagy, Irving Penn, Eliot Porter, Cindy Sherman, Stephen Shore, Laurie Simmons, Edward Steichen, Joel Sternfeld, Edward Weston and many others, and examines them in a fresh context paying particular attention to color photography’s translation onto the printed page. In doing so, it traces a new history that more fully accounts for color’s pervasive presence today.
ISBN: 1597112267
Publisher: Aperture
Hardcover : 288 pages
Language: English
Dimensions: 9.7 x 11.6 x 1.2 inches