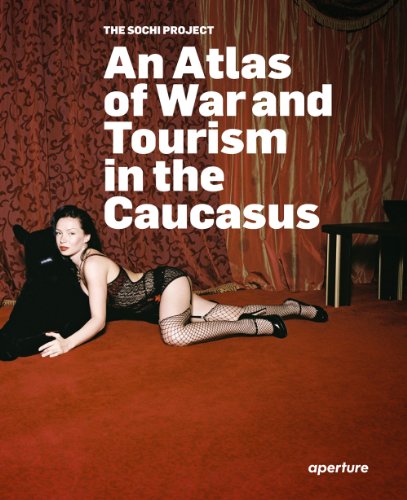 The Sochi Project: An Atlas of War and Tourism in the Caucasus
by Arnold van Bruggen
Publisher's Description
Rob Hornstra and Arnold van Bruggen have been working together since 2009 to tell the story of Sochi, Russia, site of the 2014 Winter Olympic Games. They have returned repeatedly to this region as committed practitioners of 'slow journalism,' establishing a solid foundation of research on and engagement with this small yet incredibly complicated place before it finds itself in the glare of international media attention. As Van Bruggen writes, 'Never before have the Olympic Games been held in a region that contrasts more strongly with the glamour of the event than Sochi. Just twenty kilometres away is the conflict zone Abkhazia. To the east the Caucasus Mountains stretch into obscure and impoverished republics such as North Ossetia and Chechnya.'

Hornstra's photographic approach combines the best of documentary storytelling with contemporary portraiture, found photographs, and other visual elements collected over the course of their travels. The highlights and key elements of this extensive effort are brought together for the first time in this volume, designed by Kummer & Herrman, offering alternative perspectives and in-depth reporting on this remarkable region, the site of the most expensive Olympic Games, which sits at the combustible crossroads of war, tourism, and history.
ISBN: 1597112445
Publisher: Aperture
Hardcover : 412 pages
Language: English
Dimensions: 0 x 0 x 0 inches