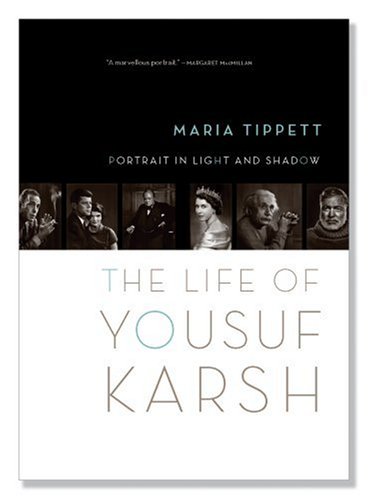 Portrait in Light and Shadow: The Life of Yousuf Karsh
by Dr. Maria Tippett
Publisher's Description
Yousuf Karsh is acknowledged to be the twentieth century's leading portrait photographer. His iconic images of Bogart, Hemingway, Churchill, the Kennedys, Auden, Castro, Einstein, the Clintons, Khrushchev, Casals, and Elizabeth II inhabit the mind's eye of anyone familiar with photographic history. A refugee from the ethnic cleansing of Turkish Armenians in 1916, Karsh made his home in Boston and Ottawa but travelled the globe during his sixty-year career, photographing political leaders, celebrities, monarchs, and movie stars. He died in 2002, aged 94. He left a legacy of 50,000 portraits.

This is the first biography, written with help from his family and colleagues and based on the Karsh archive in Ottawa. Its publication marks Karsh's centenary in 2008, when retrospective exhibitions are scheduled in a number of locations in North America, including the Boston Museum of Fine Arts, Art Institute of Chicago, Boston Public Library, and Rhode Island School of Design. The book reproduces sixty of Karsh’s most celebrated portraits, and reveals the technique behind the camera and the brilliant mastery of the photographer.
ISBN: 0300136501
Publisher: Yale University Press
Hardcover : 448 pages
Language: English
Dimensions: 6.7 x 9.1 x 1.5 inches