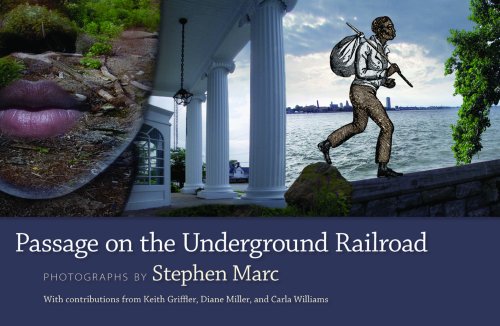 Passage on the Underground Railroad
by Stephen Marc
Publisher's Description
With contributions from Keith Griffler, Diane Miller, and Carla Williams

For seven years Stephen Marc photographed the routes traveled by fugitive slaves in their search for freedom, documenting and interpreting his research along the way. In Passage on the Underground Railroad, Marc shares the results of these explorations through his thought- provoking, unconventional, and haunting digital images.

Marc uses two types of photographic composites to reveal the history of the Underground Railroad (UGRR): multiple photographs that describe UGRR sites and metaphorical montages that address the larger horror of slavery. Each UGRR site has a story, so individual sites are portrayed inside and out, using several photographs in combination to create visual tours. The companion montages evocatively interpret the South's 'peculiar institution' from which slaves were fleeing. These multilayered narratives weave together elements from the landscape of slavery-plantation structures, crop fields, waterways, tools of bondage and agriculture, merchant tokens and bank note currency, newspaper articles, and advertisements-along with UGRR site details, antislavery materials, and contemporary cultural references.

In addition to the eighty-seven distinctive photographic creations and detailed captions, Passage on the Underground Railroad features an interview with Stephen Marc by Carla Williams, an essay by Keith Griffler, and a piece from Diane Miller discussing the historical significance of the UGRR and the role of the National Park Service's Network to Freedom sites, many of which are interpreted in this book.
ISBN: 160473129X
Publisher: University Press of Mississippi
Hardcover : 176 pages
Language: English
Dimensions: 11 x 16.7 x 0.8 inches