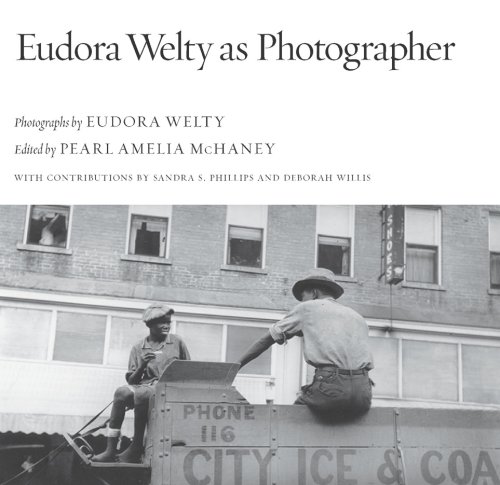 Eudora Welty as Photographer
by Pearl Amelia McHaney
Publisher's Description
These forty-three photographs, taken in the 1930s and 1940s with three different cameras, illustrate both the formal and narrative skills of framing the world as only a great short story writer could. They show Eudora Welty (1909-2001) ardently pursuing an audience and honing her technique as she worked behind the lens. Considering light, design, texture, framing, and perspective, she experimented with composition. She tried different films, papers, and exposures, took shots from various angles and distances, and cropped and enlarged photographs in her kitchen darkroom. Then she waited until morning to discover what had been revealed.

Paramount in Eudora Welty as Photographer are the photographs themselves. Only nine have been published previously. The accompanying essays-by Welty scholar Pearl Amelia McHaney; by chief curator of photography at San Francisco Museum of Modern Art Sandra S. Phillips; and by photographer and photography historian Deborah Willis-describe Welty's developing aesthetic and her representations of the world as illustrated by the photographs.

Welty took photographs of people, animals, patterns, shadows, and structures-natural and man-made-in Mississippi, Louisiana, New York, and North Carolina. The photographs are paired to contrast and complement, to surprise and suggest, and to please and provoke. Among the photographs in Eudora Welty as Photographer are prints exhibited in Jackson, Mississippi, in 1934; in Chapel Hill, North Carolina, in 1935; and in New York City in 1936 and 1937.
ISBN: 1604732326
Publisher: Univ Pr of Mississippi (Trd)
Hardcover : 96 pages
Language: English
Dimensions: 8.1 x 8 x 0.7 inches