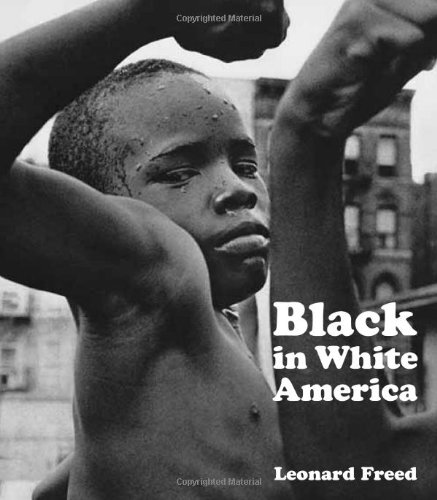 Black in White America
by Leonard Freed
Publisher's Description
Black in White America by Leonard Freed (1929-2006) is a facsimile edition of a powerful photo essay, first published in 1968, that looks at African American life during the civil rights era. The son of Eastern-European Jews, Freed became interested in examining the cultural fabric of African American life after working as a freelance photographer in Berlin in the early 1960s and witnessing black soldiers protecting freedom abroad while their brothers and sisters were fighting for civil rights at home. He went on to become a pioneer in the genre of socially conscious photojournalism.

Freed's photo essay presents a composite of the daily lives of black people in the north and south, on city streets, in housing projects, and in rural communities, living joyously, peacefully, and defiantly during the greatest social struggle of our times. The photographs are accompanied by personal interviews and journal entries, lyrics of Negro spirituals and protest songs, as well as an excerpt from Martin Luther King Jr.'s 'I have a dream' speech. One picture shows Dr. King in an open convertible being greeted by an eager crowd of admirers. Another presents a young man lifting his fist to Freed's lens. Taken as a whole, Black in White America conveys human dignity in the midst of the struggle for racial equality.

Leonard Freed was born in Brooklyn, New York, and began taking photographs in 1953 while living in the Netherlands. He traveled the world on assignment for the international press and published thirteen books. His photographs are included in the collections of the International Center of Photography, the Metropolitan Museum of Art in New York, and the J. Paul Getty Museum.
ISBN: 1606060112
Publisher: J. Paul Getty Museum
Paperback : 208 pages
Language: English
Dimensions: 8.9 x 10.1 x 0.6 inches