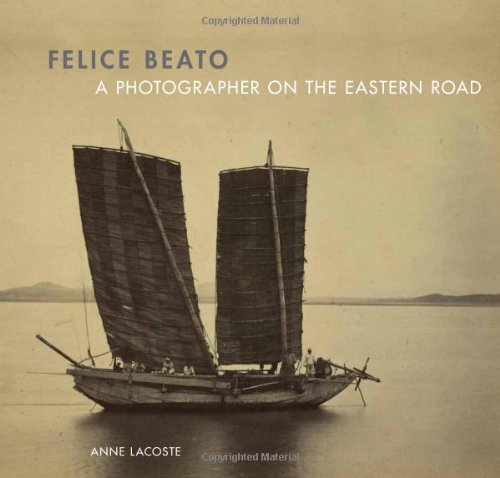 Felice Beato: A Photographer on the Eastern Road
by Fred Ritchin
Publisher's Description
In recent years Felice Beato (1832-1909) has come to be recognized as one of the major photographers of the nineteenth century, yet until now there has been no general survey of his singular life and work. Born in Venice, Italy, Beato came of age in the Ottoman capital of Constantinople. As a young apprentice in 1856, he photographed the sites of the Crimean War, thereby launching a long and remarkably adventurous career. Over the next half century he would follow in the wake of the British Empire: Egypt, Palestine, and Syria; India, where he photographed the aftermath of the Indian Mutiny; and China, where he chronicled the Second Opium War. He spent some thirty years in Japan and Burma, where he was among the first commercial photographers at the time that these countries were starting to open to the West.

This abundantly illustrated book accompanies an exhibition—the first devoted to Beato's entire oeuvre—on view at the J. Paul Getty Museum from December 7, 2010, to April 3, 2011. The text includes an engaging narrative of his life and entrepreneurial career and a thought-provoking essay on Beato and the photography of war. There is a generous selection of his photographs, including panoramas and hand-colored Japanese studies, along with captivating period ephemera, lithographs based on his work, and humorous caricatures of the artist.
ISBN: 160606035X
Publisher: J. Paul Getty Museum
Hardcover : 208 pages
Language: English
Dimensions: 11 x 10.5 x 0 inches