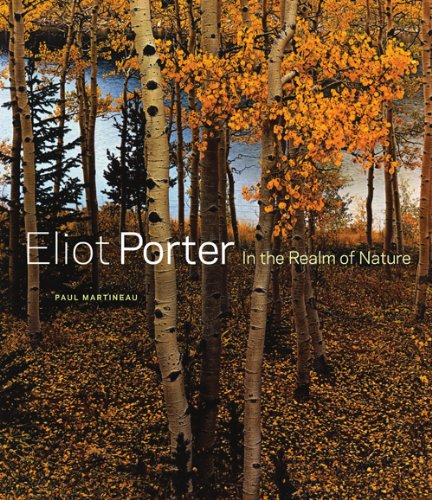 Eliot Porter: In the Realm of Nature
by Michael Brune
Publisher's Description
Known for his exquisite images of birds and landscape, Eliot Porter (American 1901-1990) was a pioneer in the use of color photography. His work also became a powerful visual argument for environmental conservation. Trained as a medical doctor and possessing a scientist’s gift for close observation, Porter explored new ways of depicting nature, building blinds in trees so he could study his avian subjects at closer vantage, and producing landscape images that capture both pristine forest and ragged river canyons with equal force and brilliance.

Initially encouraged by the groundbreaking photographers Ansel Adams and Alfred Stieglitz, Porter went on to produce a body of work all his own. His 1962 Sierra Club book In Wildness Is the Preservation of the World, with its images grouped by season and accompanied by quotations from Henry David Thoreau, transformed the concept of nature photography books. Ultimately, Porter’s photographs came to the attention of Congress and led to the passage of the Wilderness Act of 1964, the foundational law of wilderness management today.
ISBN: 1606061194
Publisher: J. Paul Getty Museum
Hardcover : 144 pages
Language: English
Dimensions: 9.5 x 11 x 0.8 inches