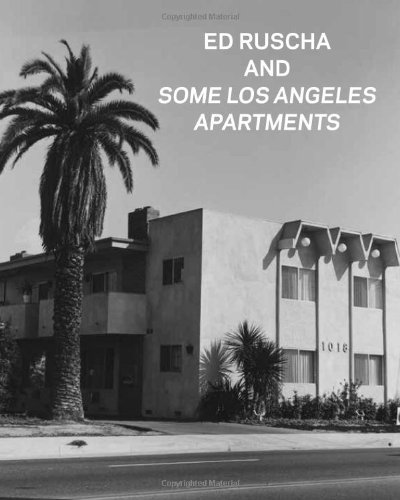 Ed Ruscha and Some Los Angeles Apartments
by Virginia Heckert
Publisher's Description
Los Angeles–based contemporary artist Ed Ruscha is celebrated for his paintings, drawings, prints, and artist’s books, receiving widespread critical acclaim for more than half a century. Capturing the quintessential Los Angeles experience with its balance of the banal and the beautiful, his photobooks of the 1960s—such as Twentysix Gasoline Stations, Every Building on the Sunset Strip, Some Los Angeles Apartments, and Thirtyfour Parking Lots—are known for their deadpan cataloguing of the city’s functional architecture.

This publication features thirty-eight Ruscha plates and an essay that traces the evolution of the artist’s thinking about his photographs initially as the means to the end of his self-published photobooks and eventually as works of art in and of themselves. Virginia Heckert contextualizes Ruscha’s photographs within the history of photographic documentation of vernacular architecture, using examples by such important photographers as Carleton Watkins, Eugène Atget, and Walker Evans, as well as contemporary photographers, many of whom have acknowledged Ruscha as an influence in their own depiction of the built environment.