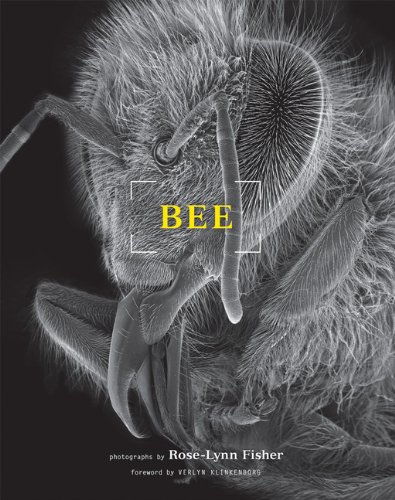 Bee
by Verlyn Klinkenborg
Publisher's Description
Of the ten million or so different species of insects on our planet, none is more fascinating than the honeybee. One of the oldest forms of animal life still in existence from the Neolithic Age, bees have been worshipped and mythologized since the beginning of human history. Known popularly for their industriousness ('as busy as a bee') and highly valued for their role in agricultural pollination (every third bite we take depends on them), bees are now kept by a quarter-million beekeepers in the United States alone, and millions more around the world.

Melding art and science, photographer Rose-Lynn Fisher puts this modern tool to creative use in order to reveal the microscopic majesty of these natural wonders. BEE presents sixty astonishing photographs of honeybee anatomy in magnifications ranging from 10x to 5000x. Rendered in stunning detail, Fisher's photographs uncover the strange beauty of the honeybee's pattern, form, and structure. Comprising 6,900 hexagonal lenses, their eyes resemble the structure of a honeycomb. The honeybee's proboscis-a strawlike appendage used to suck nectar out of flowers, folds resembles a long, slender hairy tongue. Its six-legged exoskeleton is fuzzy with hairs that build up a static charge as the bee flies in order to electrically attract pollen. Wings clasp together with tiny hooks and a double-edged stinger resembles a serrated hypodermic needle. The honeybee's three pairs of segmented legs are a revelation, with their antennae cleaners, sharp-pointed claws, and baskets to carry pollen to the hive. These visual discoveries, made otherworldly through Fisher's lens, expand the boundaries of our thinking about the natural world and stimulate our imaginations. BEE features a foreword by nature writer and New York Times editorial board member Verlyn Klinkenborg.
ISBN: 1616890762
Publisher: Princeton Architectural Press
Paperback : 128 pages
Language: English
Dimensions: 8.3 x 9.5 x 0.5 inches