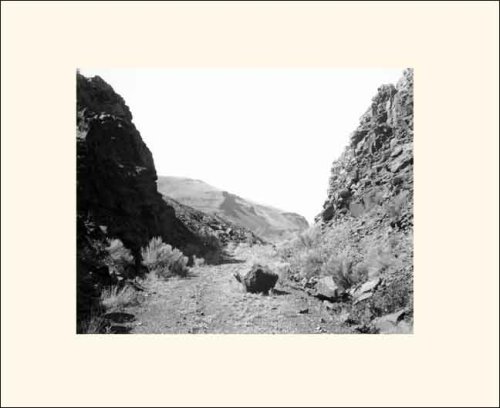 Westward the Course of Empire (Yale Art Gallery)
by Director Jock Reynolds
Publisher's Description
Mark Ruwedel (b. 1954) has photographed the American West for the past twenty-five years, revealing the narratives—both geological and human—contained within the landscape. This stunning book presents more than 70 prints from Ruwedel’s ongoing series Westward the Course of Empire, an inventory of the residual landforms created by the scores of railroads built in the American and Canadian West since 1869.

The grades, cuts, tunnels, and trestles depicted in Ruwedel’s photographs speak to a past triumph of technology over what was often perceived as hostile terrain, as well as to the desire and struggle to create wealth and power from the land. Long abandoned (and in some cases never completed), the railroads also evoke the futility of the enterprise. This book is thus a sublime yet restrained elegy to the land and to the follies and wonders of human ambition.

Gallery Luisotti is please to announce the release of an exclusive limited edition book and print accompanying Mark Ruwedel's just released publication, 'Westward the Course of Empire.' Featured are more than 70 tri-tone reproductions from the artist's seminal series of the same name. The limited edition by Gallery Luisotti is being published simultaneously with a trade edition from the Yale University Art Gallery and Yale University Press.

Mark Ruwedel has spent 15 year photographing the residual landforms created by the hundreds of railroads built in the American and Canadian West since 1869. The photographs 'call the past, present and future into consideration through a haunting visual journey that offers us no end in sight,' writes Jock Reynolds, Director at the Yale University Art Gallery, in his introduction. The book's design echoes a 19th-century travel album, with the artist's hand-lettered titles reproduced opposite each photo.

This collectors edition features a signed and numbered book with gilded page edges, a signed gelatin silver photograph printed by the artist all housed in an elegant custom made clam shell box. Ruwedel has chosen three different images reproduced in the book to accompany this rare special edition. Buyers can choose the print they prefer, subject to availability. This special edition is limited to 60 copies and will begin selling at $1,500.