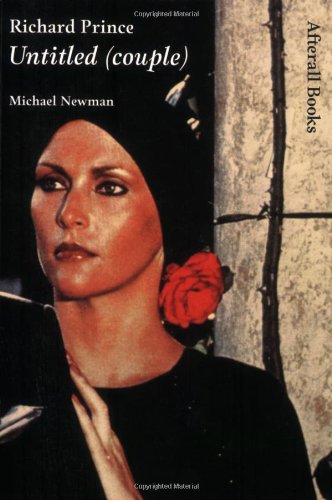 Richard Prince: Untitled (couple) (AFTERALL)
by Michael Newman
Publisher's Description
In Richard Prince's 1977 work Untitled (couple), difference mixes uncannily with sameness. We can't quite tell whether the shiny couple we see is human or android; their clothing seems curiously out of date. Why do they fascinate us? What is it about their typicality that produces an impression of strangeness?

Michael Newman explores Prince's work and his revival of the image through photography-rephotographed reproduced photographs-after the impasses of conceptualism. Newman examines the relation of Prince's work to images appearing in illustrated magazines, advertising, and television during the artist's formative years and argues that the vintage TV series The Twilight Zone is crucial to understanding Prince's use of images in his work. He considers Prince's strategy of rephotographing photographs and looks at the theoretical, cultural, and critical implications of that practice. Drawing on previously unpublished material from a discussion he had with Prince in the early 1980s, Newman places Untitled (couple) within the context of Prince's writings and his other work including the famous Untitled (cowboy) series (rephotographed images of the iconic Marlboro man) and its expression of the role of fantasy in advertising. During the 1960s, structuralism recast the image as text; Prince's work, Newman argues, revived the image in such a way that it is irreducible to text.

Richard Prince is an artist based in New York known as a critic of and commentator on American consumer culture, including movies, advertisements, cartoons, and popular jokes.

Michael Newman is Associate Professor of Art History, Theory, and Criticism in the School of the Art Institute of Chicago. He has published in ArtForum, Art in America, Parachute, and other journals and is coeditor of the book Rewriting Conceptual Art.
ISBN: 1846380030
Publisher: Afterall Books
Paperback : 176 pages
Language: English
Dimensions: 5.8 x 8.2 x 0.6 inches