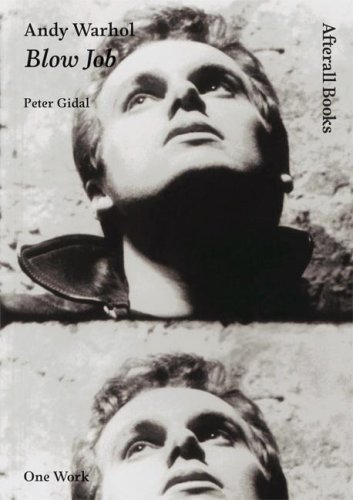 Andy Warhol: Blowjob (One Work)
by Peter Gidal
Publisher's Description
In Andy Warhol's silent black-and-white movie, Blow Job (1964), a youth is filmed as he is apparently being given the sex act named in the title. The 35-minute film is accentuated by the paucity of expression on the actor's face: we see only his head and shoulders, rigidly framed so that all offscreen space has to be imagined, or avoided. Sometimes the young actor looks bored, sometimes as if he is thinking, sometimes as if he is aware of the camera, sometimes as if he is not. Like the protagonists of other Warhol films, he is apparently left to his own devices.

Warhol's 16mm films (including Blow Job, Sleep, Empire, and Henry Geldzahler), with their take on boredom, voyeurism, and the supposedly unmoving camera, continue to be influential today. In their own era of the early 1960s, they forced avant-garde film away from various forms of romantic illusionism and onto the reality of the specific film-as-projected. The film process itself became inseparable from the act of the viewer's viewing. In this extended examination of Blow Job, Peter Gidal deciphers the structures, abstract and concrete, of Warhol's crucial film. Warhol's techniques-the use of the close-up, the general use of camera movement, and the complete theatrical mise en scène-(especially when compared to the Godardian cinéma vérité of the time) make the materiality of the film process, its making and viewing, ineluctably present.
ISBN: 184638043X
Publisher: Afterall Books
Hardcover : 86 pages
Language: English
Dimensions: 6.3 x 8.2 x 0.6 inches