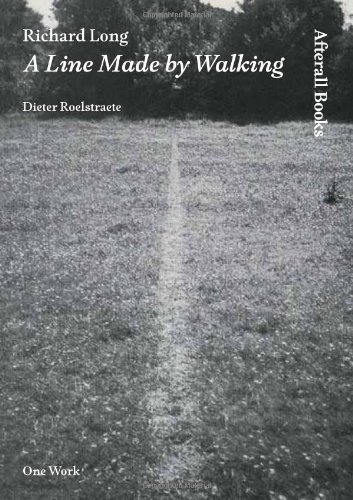 Richard Long: A Line Made by Walking (AFTERALL)
by Dieter Roelstraete
Publisher's Description
In 1967, Richard Long, then twenty-two years old and a student at Saint Martin's School of Art in London, walked back and forth along a straight line in the grass in the English countryside, leaving a track that he then photographed in black and white. The resulting work, A Line Made by Walking, was not only the starting point for Long's career as an artist but also a landmark for a new kind of art emerging in Europe and the Americas. The formal simplicity of Long's artwork suggested a relation to minimalism, but its location outside the gallery context and its suggestion of bodily actions also connected it to a new generation of artists whose work combined the organic, the temporary, the nonmaterial, and the performative to offer a critique of the art system and its language, forms, and values. Long's work bridged the concerns of his North American and European counterparts, connecting the industrial scale of Robert Smithson to the modesty of Gilberto Zorio, the exercises in dematerialization of Robert Morris with the organic forms of Alighiero e Boetti, and the performance of Yvonne Rainer with that of Joseph Beuys.

Although A Line Made by Walking is an instantly recognizable work, no detailed analysis of this foundational piece has yet been published. At a time when Richard Long's career is being celebrated and reassessed, this study by writer and curator Dieter Roelstraete could not be more timely.
ISBN: 184638060X
Publisher: Afterall
Hardcover : 112 pages
Language: English
Dimensions: 5.9 x 8.3 x 0.7 inches