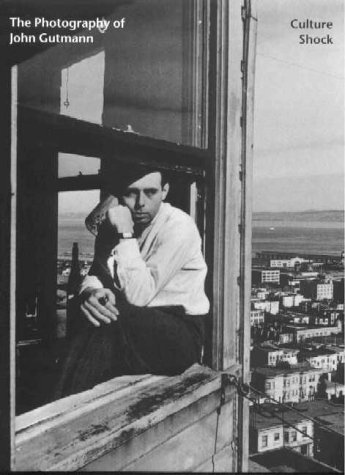 The Photography of John Gutmann: Culture Shock
by Sandra B. Phillips
Publisher's Description
Having emigrated to San Francisco to escape the rise of Hitler, Gutman was fascinated with the popular photography found in American print media. This handsome volume brings to light a great deal of his iconographic work--advertising signs, industrial architecture, and expressive portraits--revealing the social turbulence prevalent during the 1940s and 1950s.
Amazon.com Review
In 1933, as America adjusted to the Great Depression, the young artist John Gutmann left Berlin and settled in San Francisco. With an émigré's clear vision, he photographed an energetic society on the move. Automobiles, for example, are a constant motif: Gutmann was amazed at their ubiquity in consumerist America compared to Europe, where they were still owned only by the privileged. Gutmann's idiosyncratic portraits and vignettes of street life captured the vitality of urban America and delivered a strong social message. His directness is the antithesis of the lyricism of his California contemporaries Edward Weston and Ansel Adams, whose work he found self-conscious and annoying.

The lively essay by Sandra Phillips, curator of photography at San Francisco MOMA, is correspondingly and refreshingly free of contemporary art jargon. Her analysis of the avant-garde German magazines to which Gutmann was exposed during his formative years is excellent; she notes affinities with pictures of athletes, massed individuals, and airplane maneuvers that he would have seen in early Nazi Germany--another society in ferment. We learn technical details--for example, that the Leica still-camera was invented to test sprocketed movie film. The hundred images illustrated in The Photography of John Gutmann: Culture Shock were chosen by Gutmann himself shortly before his death at the age of 93 to represent his work. Stanford's Center for Visual Arts has organized them into an exhibition for which this book is the well-produced catalog, besides being the definitive study of Gutmann to date. --John Stevenson