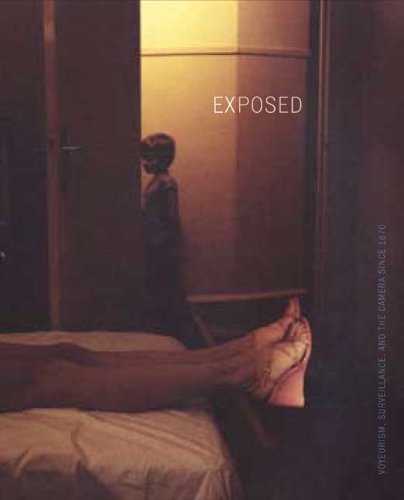 Exposed: Voyeurism, Surveillance, and the Camera Since 1870
by Philip Brookman
Publisher's Description
Since the rise of the photographic medium in the late 19th century, people have been fascinated by the camera’s ability to record striking moments both public and private. From Matthew Brady’s haunting images of the Civil War to the present day paparazzi’s brand of voyeurism-for-hire, photography has long served to capture not only the posed portrait but also the personal, the intimate, the unexpected, and the taboo. This fascinating book examines the ways in which acts of voyeurism and surveillance have inspired, challenged, and expanded the medium of photography throughout its evolution.

Featuring photography by Sophie Calle, Henri Cartier-Bresson, Walker Evans, Harun Farocki, Nan Goldin, Robert Mapplethorpe, Helmut Newton, Andy Warhol, and Weegee, among others, Exposed chronicles the artistic, political, and even moral dilemmas that underlie some of these artists’ best known works. Through insightful essays and commentary by Sandra Phillips, one of the foremost authorities on the history of 20th-century photography, Exposed examines some of the most invasive and unsettling aspects of photography, including the use of the hidden camera, the production of erotic pictures and pornography, and the intersection of photography with both celebrity and violence.
ISBN: 0300163436
Publisher: Yale University Press
Hardcover : 256 pages
Language: English
Dimensions: 9.6 x 12.8 x 0.9 inches