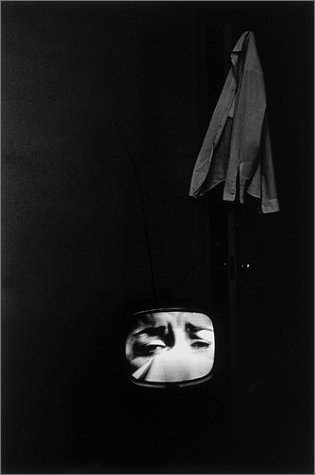 Lee Friedlander: The Little Screens
by Lee Friedlander
Publisher's Description
"The Little Screens" is a revered and influential body of early work by Lee Friedlander, but it has never before been brought together in its entirety. The book's title refers to the television screens housed in motel rooms and other nondescript rooms of anonymous character spread throughout the country during the 1960s. Each screen vividly transmits images of popular culture icons, political figures, or minor celebrities of the times. The environments are iconographic ghost-rooms filled with bland furniture-rooms without personality, rooms that could be, and are, anywhere and everywhere. "The Little Screens" and their environments weave a narrative of a peripatetic photographer moving through the landscape of 1960s America, and the melancholy, yet sometimes comic quality of life lived on the road. They provide a look at the 1960s as so many people saw it: beamed into their televisions and flickering across their living rooms. The book's preface was written by the legendary Walker Evans after he saw the photographs in 1963.

Foreword by Walker Evans. Walker Evans is a legendary American photographer best known for his iconic work for the WPA in the 1930s, as well as his collaboration with writer James Agee on the book "Let Us Now Praise Famous Men", though his career spanned many decades. A major retrospective of his work was organized by the Metropolitan Museum of Art in 2000, generating several publications and spawning a new enthusiasm for his work.