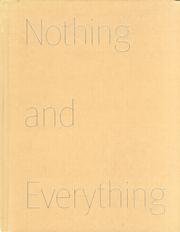 Nothing and Everything
by Peter Freeman
Publisher's Description
Nothing and Everything, the catalog to a show of the same name, investigates one of art’s oldest mysteries: how an artwork may simultaneously contain elements of emptiness and fullness, void and profusion. These qualities may appear contradictory but they do not have to be so. Several works, including Peter Hujar’s 1975 photograph of the Hudson River and Ellsworth Kelly’s drawing Light Reflecting on Water (1950), explore connections between the banal and the sublime, particularly in nature. Diane Arbus’s photograph Clouds on a Screen at a Drive-in, N.J. (1960), for example, blurs the line between the mundane and the transcendent with its image of a billowing cloud on the movie screen against the evening sky. More than a statement of modern man’s distance from nature, the photograph captures a moment of the sublime bounded by the everyday.

To some eyes the works in the exhibition may appear fraudulent; to other eyes they will seem profound. Piero Manzoni’s Achrome (1963), made of kaolin and polystyrene beads on canvas, expresses the hyperbolic relationship between zero and infinity. Vija Celmin’s Untitled (1994-95) drawing of a starry expanse, and Nicholas Nixon’s Black, a recent photograph of a dog’s fur, conflate infinite expansion with close cropping. Recit de Terre, a 1960 work b y Dubuffet uses an unusual paint medium to materially echo the barren landscape it depicts, while a rarely seen 1953 Rauschenberg, Pink Clay Painting (To Pete) is actually made of mud.