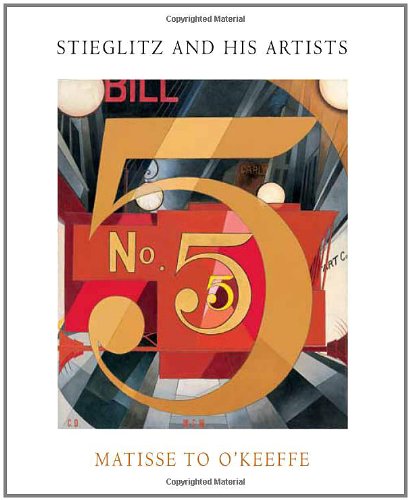 Stieglitz and His Artists: Matisse to O'Keeffe (Metropolitan Museum of Art)
by Lisa Mintz Messinger
Publisher's Description
A master photographer, Alfred Stieglitz was also a visionary promoter and avid collector of modern American and European art from the first half of the 20th century. This publication is the first fully illustrated catalogue of works in the unparalleled Alfred Stieglitz Collection, which was given to the Metropolitan Museum after Stieglitz's death.

Operating a succession of influential New York galleries between 1905 and 1946, Stieglitz exhibited many of the most important artists of the era, including Constantin Brancusi, Charles Demuth, Arthur Dove, Marsden Hartley, Vasily Kandinsky, John Marin, Henri Matisse, Georgia O'Keeffe, Pablo Picasso, and Gino Severini. He assembled a vast collection of exceptional breadth and depth that has since become the cornerstone of the Metropolitan Museum's holdings of modern art, containing such masterworks as Brancusi's Sleeping Muse, Demuth's I Saw the Figure 5 in Gold, Hartley's Portrait of a German Officer, Kandinsky's Improvisation 27 (Garden of Love II), O'Keeffe's Black Iris and Picasso's Woman Ironing and Standing Female Nude.

More than four hundred paintings, sculptures, drawings, and prints are presented in this catalogue, many of them published here for the first time. Informative essays, augmented by archival photographs and letters, new scholarship, and technical analysis, bring this fascinating period to life by focusing on the relationships these artists developed with Stieglitz and with one another.
ISBN: 0300175884
Publisher: Metropolitan Museum of Art
Hardcover : 360 pages
Language: English
Dimensions: 9.3 x 10.2 x 1.1 inches