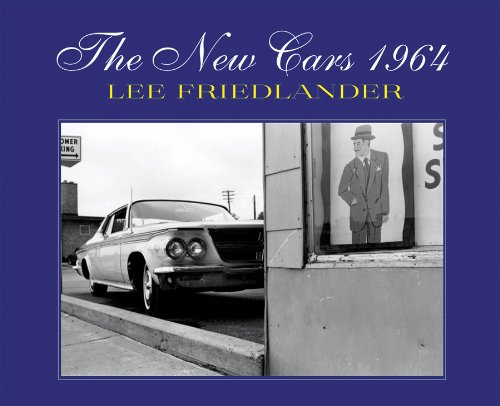 Lee Friedlander: The New Cars 1964
by Lee Friedlander
Publisher's Description
In 1964, two young art directors at Harper's Bazaar named Ruth Ansel and Bea Feitler hired the then up-and-coming photographer Lee Friedlander to photograph the much-anticipated new car models of that year. Friedlander's jazz album covers had proven he knew how to work on assignment, and Ansel and Feitler realized that if Bazaarwas to obtain the photographer's best work he should be let alone to make it. It's difficult now to comprehend how anticipated next year's cars were to Americans of the 1960s, but if Friedlander was aware of this, the photographs he delivered (on time) don't betray it. Rather than depicting the cars in seductive locales, he had them delivered to parking lots near burger joints, cheap furniture stores, downscale beauty parlors and-most ignominiously of all-a used-car lot. As Friedlander says, “I just put the cars out in the world, instead of on a pedestal.” The magazine's editor-in-chief was unamused, fearing that the photographs would deter car manufacturers from advertising in Harper's, so Friedlander was paid for his work and the photographs were soon forgotten-until he stumbled across them in 2010. Even a cursory study of this project reveals a compendium of strategies that would soon bring Friedlander acclaim and wreak havoc with widely accepted notions of what constituted a good photograph. Now, the Continentals, Eldorados and Mercury Meteors of 1964 have their day in this beautifully produced volume.
ISBN: 1881337316
Publisher: Fraenkel Gallery
Hardcover : 85 pages
Language: English
Dimensions: 11.9 x 9.8 x 0.6 inches