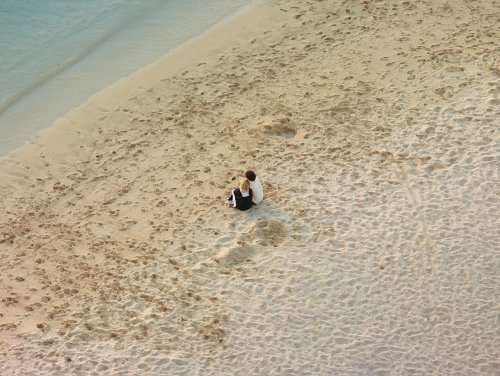 Richard Misrach: 11.21.11 5:40 PM
by Richard Misrach
Publisher's Description
Richard Misrach has begun a series of artist books that explores the relationship between photography and time. Titled by the date and minute of the image-11.21.11 5:40 pm- the book features a central picture from a new series begun in November 2011, entitled “On The Beach 2.0.” It is both an extension of, and a dialogue with his earlier On the Beach project (2001–2005).

Unbeknownst to them, the artist photographed a young couple on the beach in the late afternoon. From almost a block away one couldn’t tell what they were doing, but it appeared they were photographing the sunset. It was only back in the studio that he discovered they were making a self-portrait with their iPhone. For the artist, it was an epiphany: the couple and he were photographing the same subject at the same time. This uncanny picture embodies both a technological and cultural paradigm shift. The book is comprised of a 16-image sequence that links the two images. Future books from the series will feature different time constructs. The books will be released periodically.
ISBN: 1881337340
Publisher: Fraenkel Gallery
Hardcover : 32 pages
Language: English
Dimensions: 0 x 0 x 0 inches