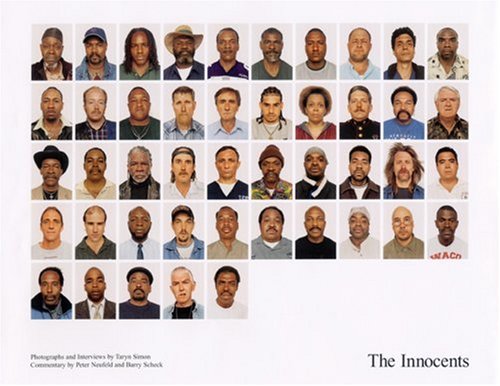 The Innocents
by Althea Wasow
Publisher's Description
Amazon.com Review
The Innocents is a book of portraits of former inmates accompanying a traveling exhibit by the same name mounted by the Innocence Project, a 10-year-old civil rights program founded by rock-star attorneys Peter Neufeld and Barry Scheck to free the wrongly convicted via DNA testing. Neufeld and Scheck provide the book's foreward and brief commentary on each case. The subjects are all ex-cons who were exonerated through DNA testing and then released after serving time. Some had been sentenced to life, some to death. Taryn Simon's photographs put prisoners in the spotlight--only this time they regain their dignity and become art in the process. Of the 80-plus portraits in the book, most were taken at the scenes of the crimes. Some pose with the victims. Ronald Cotton, for example, served more than 10 years of a life sentence for rape. He is photographed with a victim, both of them staring at the camera with fortitude and bitterness. Nearly every picture is similar, the subject staring directly into the lens, always surrounded by the same eerie, diffused light like the kind when tornadoes loom. The subjects are interviewed by Simon as well; their commentary is also distressing and poignant. Neil Miller says he had a better life in prison. Richard Danziger was freed but rendered brain damaged by a jailhouse attacker. Walter Snyder went to prison instead of the Olympics. Most of these subjects were convicted on the basis of witness misidentification. Simon's photos are also like mug shots, depicting their subjects with emotionless expressions and using lighting that flattens out the surroundings. But here they set the record straight as Simon’s art helps re-humanize them. --Eric Reyes
ISBN: 1884167187
Publisher: Umbrage Editions
Hardcover : 136 pages
Language: English
Dimensions: 11.9 x 9.5 x 0.6 inches